Penicuik Silver Band played host to the Kfar Vradim Orchestra from Israel.  The Orchestra was in Scotland to perform at the Aberdeen International Youth Festival in His Majesty's Theatre at Haddo House.

This excellent concert featured the Orchestra and our own Band, each rounding off with two encore numbers - one from each of the band's/orchestra's home nation.

Penicuik Silver Band lent a hand to the Royal Highland Fusiliers with a fundraising concert in aid of the White Hackle Fund.
The White Hackle Fund was set up to support soldiers from the 2nd Battalion The Royal Regiment of Scotland who have been injured in the line of duty in Afghanistan.
The Band performed along with guest artists the Lothian & Borders Police Choir and had a fantastic evening at which £450 was raised for the Fund. A surprise concert was held on Saturday evening for Jack Forest who is soon to celebrate his 80th birthday.   Jack has been activeley involved in Penicuik Silver Band for many years, and since his retirement still regularly attends the Band's rehearsals and supports the Band at their engagements.

Many former players attended and joined the present-day band to make a total of around 50 players.

Jack was, as had been planned, completely surprised by the event, thinking that he was just coming to hear a concert by the Band, and not realising that he was to be the focus of the evening.

The programme for the evening comprised many of Jack's favourites:

A collection was taken that amounted to some £300 which will be donated to Jack's choice of charities.

A social event was held after the concert at the Fishers Tryst, Milton Bridge.

COMMUNITY CAROL SINGING at the CITY OF EDINBURGH COUNCIL

A small group of the Band provided the music for two short carol services for the City of Edinburgh Council, joined by Colonel Napier of the Salvation Army who led the services, and Blackhall Primary School Choir. The first of the two services was held at Waverley Court, the Council's new Headquarters building that was just opened at the beginning of the year.   This service, which was well attended, was held inside in the Courtyard level of the building, the music soaring up the huge atrium to all those in the building who could not attend.

The second service was held up the road, outside in the quadrangle of the Council's City Chambers building.  Again, this was well attended by staff members from that building, Councillors and members of the public.   The Lord Provost, George Grubb, left a full Council meeting to be present at the service and to deliver a Christmas message to those present.

An excellent night was enjoyed by all present in Penicuik North Kirk on Saturday evening.   The Band provided a programme of seasonal music under our MD Terry Johns, interspersed with Carol singing from the audience.

Hot drinks and home-made mince pies were served at the interval - our thanks and compliments to the bakers who excelled themselves!

Our young guests for the evening, the Cuiken Primary School Choir, shone and were certainly stars that night!

The Annual Concert was held once again in the North Kirk, Penicuik.

The event was well attended and was enjoyed by the audience and the Band alike.

The programme, smoothly compered by our MD Terry Johns, featured a number of soloists from within the Band, as well as some traditional brass band music.

Amongst the items on the programme were;

The Penicuik "Junior", or "Youth" Band played a number of items in the second half of the programme, under their leader Ian Forrest.   The young people delighted all with their excellent performance.

The Band was greatly encouraged by the reception from the audience, and by the compliments received afterwards from many of the listeners.

The Band took to the somewhat cramped stage in the St Mungo's Church Hall and provided an hour and a half of entertainment at the fete.

Many thanks to all those who assisted by playing with us, in the absence of a few of our number who were on holiday.

At last we had some dry weather and a good-sized crowd for our last Gala March of the season!

It's been quite a quiet Gala Season for us this year, but with it being so wet lately, maybe that's just as well! Unfortunately, due to the wonderful summer weather that we're having, the Gala Parade was rained off.   However, due to some good planning by the organisers, the Crowning Ceremony (at which the Band supplied the obligatory fanfares) was brought indoors to the Greenhall Centre.

Following the Ceremony, the Band entertained the crowd with a selection of tunes.

Many people gathered and enjoyed the playing of the Band - some of whom expressed an interest in attending our Annual Concert.

The Band took part in the Penicuik Gala Week celebrations.   On Thursday evening we joined with the Penicuik Pipe Band at the Beating of the Retreat.

On the Saturday afternoon the Band marched through Penicuik in the sunshine, heading up the main parade.   Also taking part were Newtongrange Silver Band and Peebles Burgh Band.

THE CITY OF EDINBURGH COUNCIL 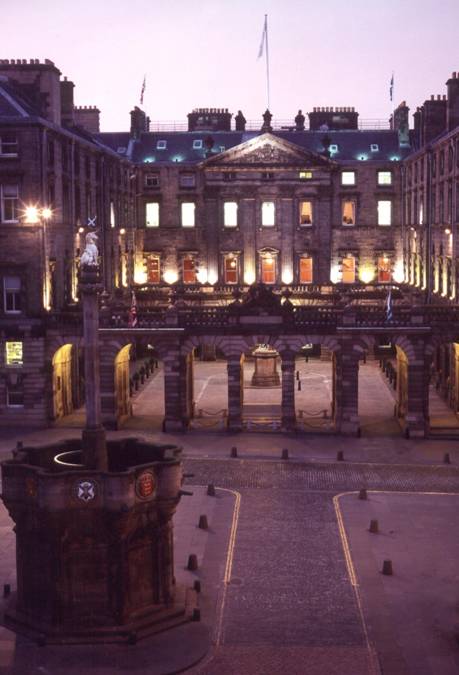 A group of the Band took part, on a very cold evening, in the Community Carol Singing that marked the official switching on of the City Chambers Christmas Lights.

Councillor Brian Fallon (Member for Property) introduced the Band and Colonel David Napier (Salvation Army) who led the carol singing.    He then introduced The Lord Provost, Lesley Hinds, who delivered a short Christmas message before switching on the lights.

Afterwards, the Band members joined the invited guests in the European Room of the Chambers, where mulled wine, fruit juice, shortbread and hot mince pies were served - much needed to assist the thawing out process!

The Lord Provost and Councillor Fallon, who showed a particular interest in the Band, both expressed their desire to make the event a fixture in the Council callendar in future.

The Band was delighted to once again be invited to take part in the St Columba's Church Carol Service.   The service, which was attended by well in excess of 600 people, also included the Christening of two baby girls.

The Church Junior Choir beautifully presented a selection of Christmas music.   It was encouraging to see such a large group of young people and to hear them singing so well.

As well as accompanying the congregational singing, the Band played items before, during and after the service.

The Band is most grateful to the people of the Church for an extremely generous retiring collection.

The Band's Christmas Carol Concert was held at 7.30pm in Penicuik North Kirk.

The concert, our first under the baton of our new MD, Terry Johns, was enjoyed by an audience of appproximately 150 people.

The Choir of Blackhall St Columba Church (Edinburgh), our special guests for the evening, entertained us with an excellent and varied choice of songs  in each half of the programme.

Amongst the highlights of the concert was the singing of Away in a Manger by children from the audience, and a special appearance by Santa who gave chocolate bars to the children present. 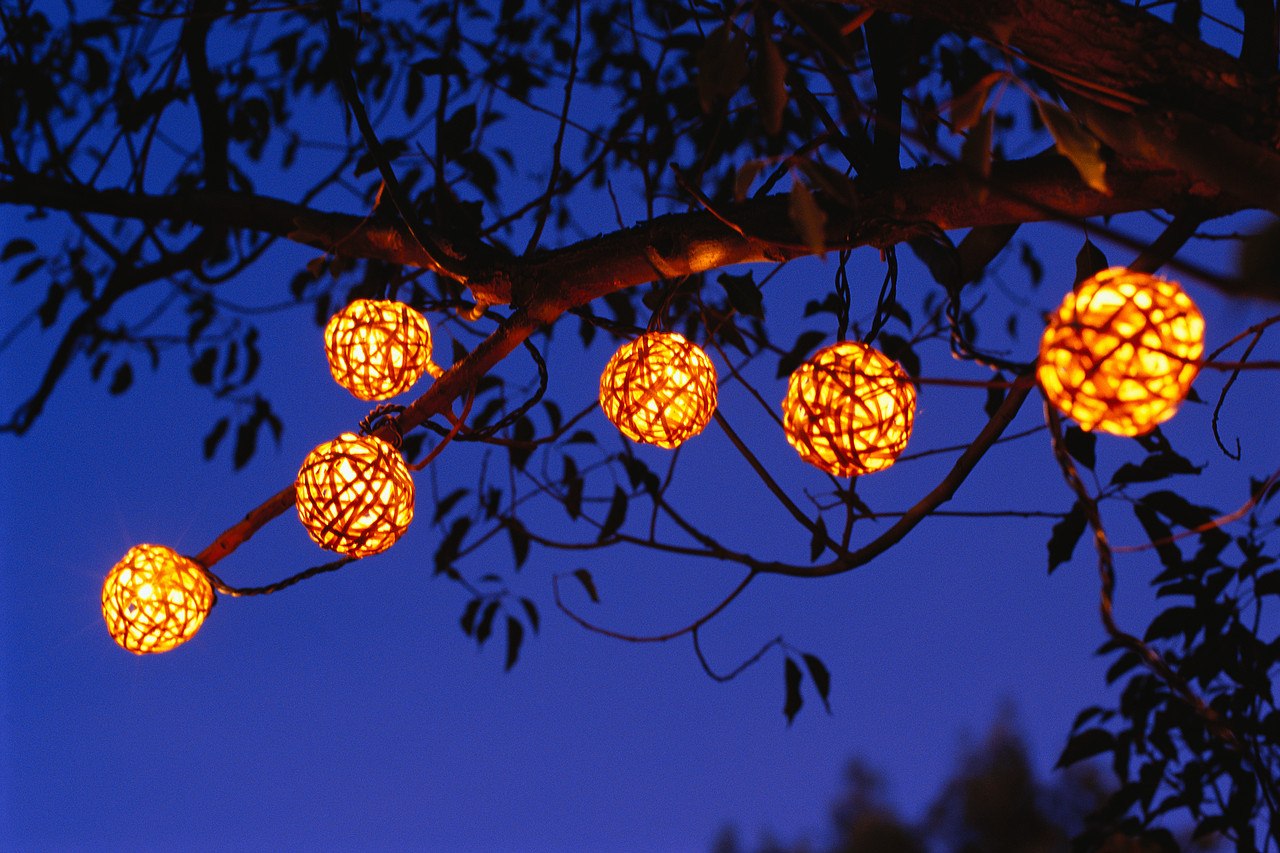 The Band accompanied the Community Carol Singing in Penicuik pedestrian precinct, preceding the switching on of the Christmas lights.

Despite the cold day, there was much hearty singing from the choir and the large crowd.

There was a good turnout from band members and supporters alike at the contest this year.

The contest was open to any member of the Band, playing solo or duet, the winners of the three awards being decided by audience vote.  Thanks to Ian Forrest for his work organising the voting papers and counting the votes. 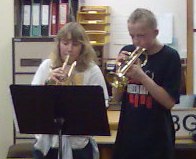 The winners of the Duet Trophy were Erin Wright and David Collin (pictured left).

Stuart Wilson (pictured right) won the Junior Soloist Trophy.  It was encouraging to hear how well these young people played.

The evening was rounded off with a social gathering with wine and mincemeat pies.   Thanks to Lorraine Bryce for organising the catering. 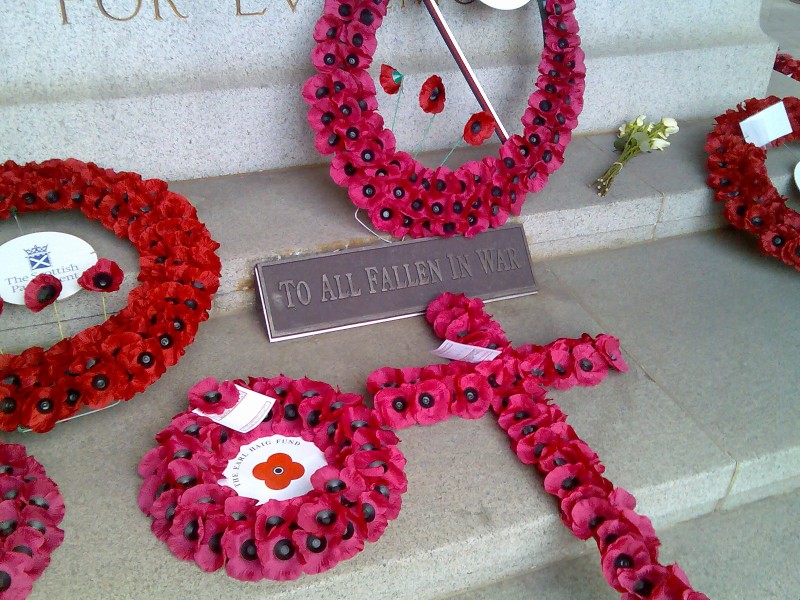 The Band took part in a well attended Service in St Mungo's Church, Penicuik, on the Sunday morning.   As the dignitaries and congregation were entering, the band played "Dear Lord and Father", an arrangement of the Hymn Tune "Repton" 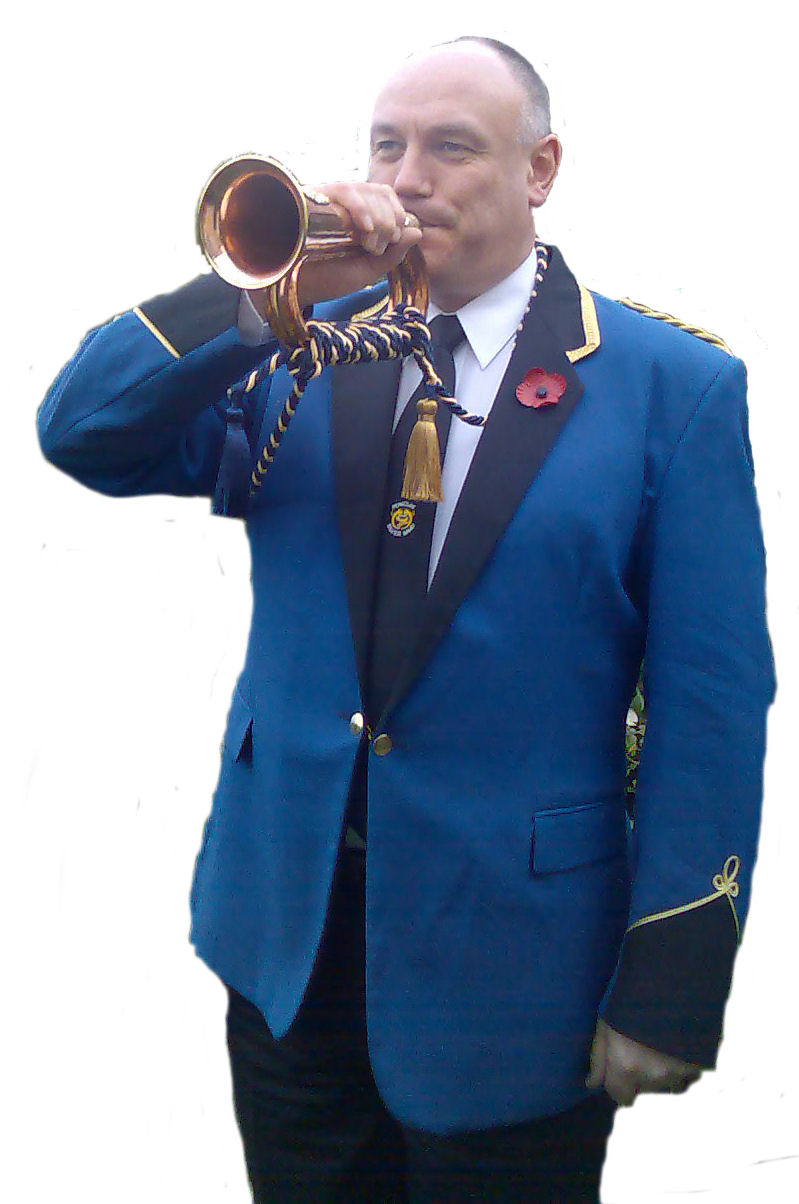 Following the service, we marched to the War Memorial where the band took part in the Wreath-Laying Ceremony.   Our MD, Terry Johns, laid a wreath on behalf of the band.

Back to the Top